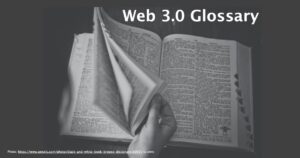 Do you experience FOMO when someone mentions a Web 3.0 term you don’t know?

Don’t worry!
This Web 3.0 Glossary of Terms has you covered so you can sound like a smartie.

Keep it handy to use whenever you need it.

Is an effort to create a collection of 10,000 digital assets and their associated NFTs for sale or gifting. Often, these digital assets are  created by a generative AI platform.

Is a string of characters to identify a digital wallet. It can send and receive cryptocurrency, NFTs and other tokens.

Is an event where free NFTs are distributed to an audience. It can be a QR code displayed on a screen so it can be captured on a smartphone, or it can be printed on cards for later access.

Is when an organization guarantees early access to a new NFT collection. Consisting of a simple list of wallet addresses and valid dates, allowlists can be created by smart contracts.

Is inside knowledge about and event or company. For example, Information about the acquisition of a company, an initial coin offering or an airdrop.

Is an image used to visually represent an individual. When secured with an NFT, an avatar is a unique asset that can be sold or traded. Avatars are used in gaming, social media and virtual reality platforms.

Is a collection of transaction records on a blockchain completed during a given time period. Blocks are cryptographically signed and linked together in a “chain.”

Is a shared and decentralized database that functions as a transaction ledger. Decentralized means that management of a blockchain is not controlled by a single entity or government. The records on a blockchain get replicated across a large number of networked computers that continually update each other. As a result, the data on a blockchain lasts forever.

Is a major NFT project. Often, it garners media attention and high prices.

Permanently pulls an NFT or crypto coin out of circulation.

Is a device that provide the same functions as online wallets but stores information offline. While more difficult to use, they’re more secure than online wallets.

Are social tokens issued by an individual creator or brand influencer. Also, creator coins can be used to obtain early access and/or discounts to the creator’s future work.

For example, a book author may reward someone with a creator coin for subscribing to a newsletter, writing a review or taking a survey.

Is short for cryptocurrency. By extension, it’s any asset or process that uses cryptography.

Is a blockchain application that creates a digital currency. Secured by cryptography on a blockchain, they are nearly impossible to counterfeit or double-spend. Individual units of cryptocurrency are called crypto coins. A crypto coin has a known value and can be exchanged for government issued currencies (referred to as fiat money).

Is the science of securing data and communications so that only a person possessing a key can decode and view the content. Earlier forms of cryptography required the physical exchange of codebooks and keys before messages could be sent securely. On the Internet, these old methods have been replaced by Public Key Cryptography, a system using two keys to encode and decode content—one public and one private.

Is a group of individuals governed by smart contracts who work for a common purpose. Although a DAO may be incorporated as a company or non-profit, the intention is to form a global association of stakeholders by-passing government regulations.

Is a practical application of blockchain and/or cryptocurrency such as a game or social platform. The software is typically developed and maintained by a DAO.

Uses a blockchain to enable financial services using cryptocurrencies without a middle man such as a bank or lending institution to transfer assets.

Is short for developers working in the Web 3.0 space. DEVS may work for a company and/or volunteer their services through a DAO.

Is the cohort of people whose lives and careers revolve around Web 3.0, gaming and virtual reality platforms.

Refers to an individual whose true identity is known to a community despite the fact that he may use an avatar and pseudonym.

Is the set of rules governing how tokens behave on the Ethereum blockchain. ERC stands for Ethereum Request for Comments.

Is an extension of the Ethereum rules governing NFTs and smart contracts.

Refers to any government issued currency. For example, the US dollar is a fiat currency.

Is the lowest price an NFT can be bought or traded for on an exchange.

Is the amount charged for recording a transaction on a blockchain. This may vary depending on a number of factors. They include traffic congestion on the network and the speed with which the parties wish the transaction to clear.

Is a collection of artificial intelligence models trained on a very large amount of online content. As a result,  GPT-3 predicts the most likely completion of the statement based on an opening statement or a prompt and a set of keywords,

The amount of Ethereum (ETH) charged for a gas fee. Gwei is used to shorten listings and to avoid confusion. One GWEI equals 0.000000001 ETH.

Is the creation of a new crypto currency, NFT or Social Token and making it available on an exchange.

Refers to any data which can’t be changed or deleted. This is the defining feature of a blockchain where records are a historical record of transactions.

Is the ability for one blockchain to access and share information with other blockchains through application programming interfaces (APIs.)

Describes a platform that provides tools to make creating and trading cryptocurrencies and NFTs easier and cheaper.

Is an individual who believes that his particular crypto is the only one to invest in.

Is the business of verifying blockchain transactions to earn cryptocurrency.  Since Bitcoin used method and it consumes a lot of energy, it’s in disfavor.

Is an application of Artificial Intelligence to discern a user’s intention given a spoken utterance.

Is one of the servers in a blockchain network.

Is a property describing blockchains where no single entity can control who uses it.

Is an NFT project that creates unique avatars for use in games and virtual worlds. By limiting the number of avatars in a series, the most popular one fetch 5 and 6-figure prices.

Is a system of tracking and verifying attendance using NFTs. Intended for education, it transfers ownership of transcripts from educational institutions to the student.

Describes a blockchain that rewards miners based on their status in a DAO.

Is a mining system where solving computationally intensive puzzles validates transactions and creates new blocks on a blockchain. BitCoin uses this system.

Is a failure to deliver on a NFT project due to scams and when a startup loses its funding.

Is an extra key necessary to recover a digital wallet or to install one on a new device. Typically it consists of an ordered list of 12 randomly chosen words.

Refers to a digital wallet controlled through an app or browser extension.

Refers assets held at a marketplace or coin exchange.

Is the promotion of an NFT project and refers to the person who is shilling.

Contains an executable code that gets triggered when related records get added to the blockchain’s ledger for an NFT.

For example, this allows escrow arrangements without the need for an intermediary such as a bank or law firm. The Ethereum blockchain was the first to add such smart contracts. Other blockchains have since adopted Ethereum’s smart contract protocols.

Issued by a community to its members to recognize contributions with cryptocurrency. They include  contributing content, recruiting new members, and/or serving on committees. By providing proofs of contribution, social tokens confer VIP status upon members. They often come with special perks and other rewards such as access to private messaging channels.

Is a cryptocurrency that has its market value tied to an external reference. It provides investment opportunities with less volatility relative to investing in other cryptocurrencies.

Locks tokens on a NFT marketplace platform to earn rewards from the platform and allows artists to earn money while showing their work in the marketplace gallery.

Refers to the general class of Web 3.0 objects that represents an asset. They include NFTs, cryptocurrencies and social tokens. Owners of tokens can hold, trade or stake them to earn interest. Not all tokens are NFTs; some are fungible.

Are the benefits from owning a NFT. They provide the reasons to buy a specific NFT.

Is a system where transactions between people and computers occur without needing a central authority, such as a bank, to validate the exchange.

WAGMI (We’re All Going to Make It)

While still in its early stages, the Web 3.0 glossary continues to evolve and change.

This Web 3.0 Glossary gives you the basic information you need to stay on top of this dynamic technology-driven environment.

Do you have another Web 3.0 term you’d like defined? Just let us know. 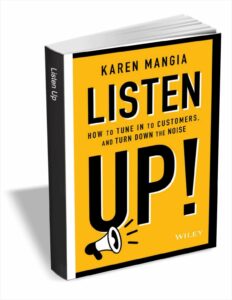 Listen Up!
How to Tune In to Customers and Turn Down the Noise

The voice of the customer matters more than any other.
Understand the number one source of your organization’s prosperity and profits with actionable insights that will help you to better connect with your customers and gain an undeniable lead over your competition.

Download this e-book – A FREE $15.00 Value
Available for a Limited Time only.

The secret of Successful Law Firm Citizenship By Investment

Tue Dec 20 , 2022
Comprehensive labor, employment and immigration regulation services for employers in just about every jurisdiction on the earth. Moreover, overseas buyers are ensured equal conditions as another domestic investor, the proper of real property possession, and circulation of capital across borders with out restrictions other than applicable taxes. There isn’t any […]

We do wondrous food and cooking